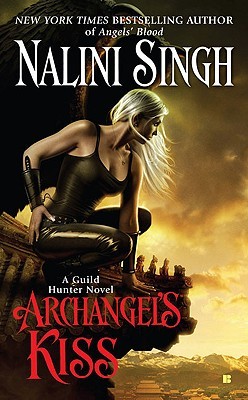 SPOILER ALERT FOR THE FIRST BOOK IN THE SERIES!

Vampire hunter Elena Deveraux wakes from a year-long coma to find herself changed—an angel with wings the colors of midnight and dawn—but her fragile body needs time to heal before she can take flight. Her lover, the stunningly dangerous archangel Raphael, is used to being in control—even when it comes to the woman he considers his own. But Elena has never done well with authority.

They’ve barely begun to understand each other when Raphael receives an invitation to a ball from the archangel Lijuan. To refuse would be a sign of fatal weakness, so Raphael must ready Elena for the flight to Beijing—and to the nightmare that awaits them there. Ancient and without conscience, Lijuan holds a power that lies with the dead. And she has organized the most perfect and most vicious of welcomes for Elena.

Archangel’s Kiss was a beautiful crafted, captivating story. I loved reading about Elena discovering her new angel side and felt like I was right there with her as she took her first flight. Elena was once again thrown into a world not of her own choosing, but she did not complain. Stoic as ever, she simply accepted her lot and moved on to more important things, such as training so as not to appear weak in front of Lijuan or any of the other number of angels after her head. Rafael is just as sexy as he was in the first book, maybe even more so now because his love for Elena is so obvious through his over-protective streak and desires to care for her at every turn. The characters in the Guild Hunter world seem as though they could quite feasibly walk off the page and into the real world. Singh walks the line between providing enough information to keep the them interesting and holding enough back that the reader can’t help but beg for more. I can only hope that some these characters are featured in Singh’s upcoming novella (details unavailable as of today). However, I was disappointed that Sara and the other Guild Hunters from Angel’s Blood did not feature heavily into this story. It makes sense that Elena would recover in the angelic stronghold, but it would have been nice to at least have Sara involved. My only other problem with this book is that the “epic battle” at the end was over far too quickly. These are the only reasons that this book did not quite make it to a full five star rating. Otherwise, it was an excellent read.
POSTED AT 06:00 No comments: 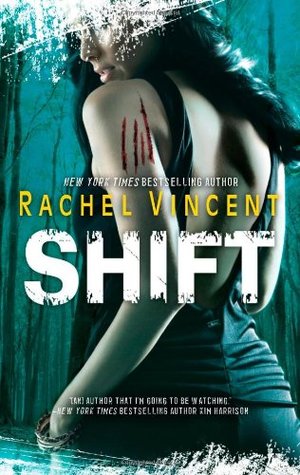 SPOILER ALERT FOR THE FIRST FIVE BOOKS IN THE SERIES!

Being the first female werecat enforcer isn't easy. Scars accumulate, but I'm stronger in so many ways.

As for my personal life? It's complicated. Choices worth making always are. Ever since my brother's death and my father's impeachment, it's all I can do to prevent more blood from spilling. Now our Pride is under attack by a flight of vicious thunderbirds. And making peace with our new enemies may be the only way to get the best of our old foe.

With the body count rising and treachery everywhere, my instincts tell me to look before I leap. But sometimes a leap of faith is the only real option . . .

Shift picks up right where Prey, book four, left off. Faythe Sanders and her Pride, led by her father, the Alpha, are planning to avenge the death of one of their own, all the while trying not to spark a civil war between the North American Prides. Even more problems arise when thunderbirds attack the compound and attempt to kidnap Kaci, the teenage werecat under Faythe’s protection. The question on everyone’s mind is: Why are the thunderbirds attacking now, when they haven’t had any contact with the werecats in over sixty years? The answer leads Faythe and the Pride into a sticky web of deceit, treachery, and lies. Along the way, Faythe must deal with the fallout from her romantic entanglement with Jace, and how it will affect her relationship with Marc.

Rachel Vincent did a wonderful job with Shift. In the first four books, the main protagonist, Faythe, was very immature, making the same bad decisions over and over again. I had almost given up on her, but had to read the next installment to see what happened to the characters. I’m so happy that I did. Faythe is finally stepping up to the plate. She still makes a few bad decisions, of course, but the reader is able to see that she has grown emotionally and understands that there are consequences to her actions for people other than herself. She is also learning how to act like an Alpha, a position for which her father and Marc have been grooming her for the last few years. The end of this book was very promising. Faythe had many hard decisions to make, but she stood up to the challenge and thrived. I can’t wait for Alpha!
POSTED AT 06:00 No comments: 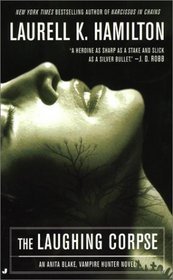 Harold Gaynor offers Anita Blake a million dollars to raise a 300-year-old zombie. Knowing it means a human sacrifice will be necessary, Anita turns him down. But when dead bodies start turning up, she realizes that someone else has raised Harold's zombies - and that the zombie is a killer. Anita pits her power against the zombie and the voodoo priestess who controls it.

In The Laughing Corpse, Anita will learn that there are some secrets better left buried - and some people better off dead . . .

The Laughing Corpse is the second installment in Laurell K. Hamilton’s Anita Blake series. Unlike the first book, this story focuses more on Anita’s work – reanimating the dead – than vampires. Anita is asked to raise a 283-year-old corpse, which is impossible to do without a human sacrifice. She walks away from the deal, but it turns out that Harold Gaynor is not an easy man to turn down. Between dealing with Harold, working with the police, and avoiding the new Master of the City, Anita’s life is busier than ever.

Because of all the crime scenes that Anita is called to, this book reads like an episode of CSI or Law & Order, bad jokes and all. The descriptions were a little gory for my taste, sometimes even disturbing. It’s always worse when children are involved. Another theme running through the book was the idea of legal rights for zombies. It seems silly at first, but Anita continues to run across ways in which zombies are being used that seem completely inhumane. I was disappointed that this theme was not explored more thoroughly, though hopefully Hamilton will do so in the next installment.

Once again, I felt that the writing style was flat. Even worse was the repetition of lines from the first book. I can understand wanting the book to be able to stand alone, but it would have been nice to not have entire sections copied word-for-word from Guilty Pleasures. Unfortunately, The Laughing Corpse suffers from the same horrible grammatical issues as Hamilton’s first book. I have to wonder if she let anyone edit her work.

I will continue to read this series, but only to see if her writing style changes. Anita is an interesting character, but that is more because of her job than her personality. The fact that she is so confident in her ability to take care of herself, yet relies so heavily on (and finds so much comfort in) her gun, is unrealistic. She is brash and unsympathetic. Hopefully this will change in the future, as the character matures.
POSTED AT 23:59 No comments: 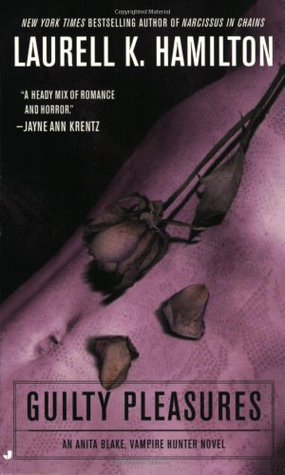 Anita Blake may be small and young, but vampires call her the Executioner. Anita is a necromancer and vampire hunter in a time when vampires are protected by law - as long as they don't get too nasty. Now someone's killing innocent vampires and Anita agrees - with a bit of vampiric arm-twisting - to help figure out who and why.

Trust is a luxury Anita can't afford when her allies aren't human. The city's most powerful vampire, Nikolaos, is 1,000 years old and looks like a 10-year-old girl. The second most power vampire, Jean-Claude, is interested in more than just Anita's professional talents, but the fiesty necromancer isn't playing along - yet. This popular series has a wild eneergy and humor, and some very appealing characters - both dead and alive.

Guilty Pleasures is the first installment in Laurell K. Hamilton's Anita Blake series. Anita Blake is an animator - a necromancer - and a vampire slayer. Some call her "The Executioner." The book's concept is an interesting one: In Anita's world, the vampires, as well as other supernatural beings such as necromancers and weres, live in an uneasy alliance with ordinary humans. Then, Anita's life is turned upside down when she is targeted by a master vampire to investigate vampire murders in her hometown of St. Louis. While keeping her head and saving her friend's life, she must also juggle the demands of working as an animator - through a company called Animators, Inc., no less! - and as a police consultant on vampire and other supernatural matters.

The problems with this book are not with the story; its execution, however, leaves much to be desired. Hamilton's use of fragments and stunted sentences to describe less-than-mundane surroundings makes this a choppy read. Her attempts at wit and sarcasm for the Anita character come off instead as flat and childish. The writing is simply dull and dry, making this a slow read. One can only hope that this book is suffering from first-in-a-series syndrome and that the writing will improve with the next installment.
POSTED AT 23:58 No comments: